The Black and Blue combined lava caving and snorkelling tour was one of the best experiences I had while in Iceland earlier this month, and the memory of the day will stay with me for a long time. In fact, it was definitely a highlight of my thirteen days in this amazing country.

The day started in the lava fields near the Blue Mountains, just outside of Reykjavik. White snow covered mountains surrounded us as we alighted from the mini bus, and onto the lava field, strewn with volcanic rocks.

After a week in Iceland, some of the snow had melted and it was great to see some of the land without it. The volcanic rocks were covered in green moss, adding some colour to the white landscape. After being fitted with a helmet that had a headlight attached, we stepped carefully over ice and snow through the lava field, and to an opening in the earth. Onto our bottoms we went, and slid below the surface into the cave.

The lava cave was amazing. We first entered an area where we could stand upright. At the entrance was a huge icicle column with water running within. You could stand upright through all of the lava cave, with only two occasions when you had to get onto your knees to crawl due to ice underfoot and the lower lava walls.

The second part of the lava cave contained frozen ice hanging from the cave’s roof, like ice stalicmites. Our guide was informative about how the lava cave was created, with its different structures, and some great stories about trolls! At one point, we all had to stand with our back to the cave wall and switch off our head lights. We were plunged into such a darkness, I couldn’t even see my hand as I waved it in front of my face.

We journeyed another thirty metres to a low area of the cave where we had to squat down to view. From the cave’s roof, there were hundreds of teeth like structures that our guide compared to the teeth of a whale. Having journeyed less than 500 metres, we made our way back to the cave’s entrance, crawling on hands and knees to emerge back to the outside world.

The snorkelling in Silfra Fissure was superb. Located in Pingvellir National Park,
We met our two snorkelling guides where we spent a good forty five minutes putting on the necessary clothing for the snorkelling in two degrees celsius (36F) water. This included a thermal wetsuit, normal wetsuit, gloves, socks and hat. The guides also sealed some of our gloves and suits with a rubber band at the wrists and neck to prevent water from seeping in. I felt completely protected from the outdoor elements of winter, but still anxious as to how the water was going to feel.

The world beneath the surface of the water was so beautiful and amazing! It’s by far one of the best experiences I’ve had snorkelling. The water was crystal clear with visibility extending eighty to one hundred metres.

As I snorkelled along, the walls of the fissure flanked my right and left. At times it was shallow, but the most spectacular part was when the walls extended deep down below me, and I couldn’t see the sandy floor. It felt like I was flying above a canyon. Rocks of various sizes were scattered about, sometimes inches from my body as I snorkelled over them.

We spent forty five minutes swimming with the current, following a route, and exiting at a different point. It felt strange to finally emerge out of the water. The world beneath the surface disappeared to reveal a calm fissure, surrounded by mountains ranges in the distance. It was such a peaceful experience with such spectacular scenery.

I did manage to get my clothes wet under my thermal wetsuit as a result of water trickling in at the neck. The rubber band I was given didn’t work and not long after I entered the fissure, I felt cold water trickle in. But it didn’t make me cold, as my body warmed the water up quickly. Getting our clothes wet didn’t happen to most people, only two of us. So just make sure you have a spare set just in case.

I also debated whether to buy a waterproof camera. Frankly I wish I had! You can purchase one at the tour office, or bring one with you, the latter being the cheaper option. You can also rent a digital waterproof camera. So the picture attached is compliments of another member on our tour group. The picture doesn’t quite capture the experience, but hopefully gives you some idea of the scenery.

A few tips I’d recommend is to make sure the pants you wear are waterproof and appropriate for outdoor activities. You do need to slide into the entrance of the lava cave on your bottom, as well as crawl or slide to move through one smaller opening in the cave. As it was winter when I was on tour, this meant sitting and sliding on snow and ice. People who were in jeans were rather wet by the time we exited. Also, make sure you have sturdy outdoor hiking shoes or boots.

I highly recommend lava caving, and snorkelling the Silfra Fissure with Arctic Adventures. The snorkelling was totally unforgettable, highly memorable, and one of the best experiences I’ve had. Next time I’ll be back with my PADI so I can scuba dive the Fissure.

So here’s my first blog post on a recent trip to Belfast. I’m hoping to include blogs that are pure travel experiences,  reviews of trips and activities, and hopefully a combination of both. I will also eventually work out how to link these posts to the relevant pages I have set up. But for now, here’s my review of Allen’s Tours and my day trip with them to see The Giant’s Causeway. 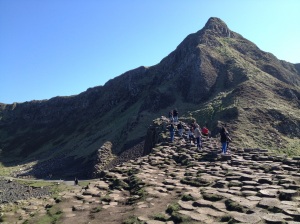 A sunny day in Belfast on Friday April 17, 2015, and I set off with Allen’s Tours on their day trip to Unesco World Heritage listed The Giants Causeway.

I don’t often join tours, let alone with big coaches, but being made widowed in May 2013 has forced some major changes to how I travel. And surprisingly I have enjoyed all of the tours I have taken since, in both Iceland and now Northern Ireland.

I enjoyed this day tour with Allen’s. It was paced just right with enough time at each location to enjoy the scenery and sights without feeling rushed.

The tour started with a photo stop at The Dark Hedges, a series of ancient beech trees that turn black in the Summer months. For Games of Throne fans, they will recognise this film location. Several other towns and villages were also pointed out along the Antrim Coastal Road, all used as film locations. Now I’ve never seen the television series, and wonder if there’s something I’m missing?! It was mentioned several times on this trip and on my recent trip to Iceland.

Our next stop was Carrick a Rede. Now owned and managed by The National Trust, it’s home to a 30 foot long, 100 feet high rope bridge. If you have a membership with the Trust, you won’t need to pay the £5.50 to the driver for the opportunity to cross it.

The coastal walk along the path and down the steps to it was beautiful. The Atlantic Ocean below was turquoise blue in colour with views across to Rathlin Island and Scotland.

I did pay to cross it but you will have to be very quick if you want a photo on it. The staff at the bridge will ask you to keep moving, so best to get the camera ready for a quick selfie or have someone else take it for you.

The Giants Causeway was the main attraction of the trip. The ancient stones needed careful attention to avoid falling, but large enough to manoeuvre. The staff on sight will blow their whistle should you try to climb the causeway at an inappropriate or unsafe spot, or venture too close to the crashing waves on the rocks.

Had there been another forty five minutes available above the generous seventy five minutes already given, I would have hiked the path up along the ridge to the “Giant’s chimneys and out to the tip of the coastline.

The stop at Northern Ireland’s oldest distillery was one the shortest stops, at only fifteen minutes. It was just enough time to sample the free whisky on offer and to make any purchases. But if you’re a whisky fan, you might find this part of the tour too short.

The last stop before our return to Belfast was Ballycastle. Situated on the edge of a cliff, the castle had some superb views of the ocean.

Our guide was full of interesting facts at each location, and patient with the small handful of passages who were between five to ten minutes late back to the bus. This only happened on two occasions and didn’t cause any disruption to the tour.
One tip I’d recommend is to choose a seat on the right hand side of the bus behind the driver. You will have the best views along the Antrim Coastal Road from Carrick A Rede to The Giants Causeway.

For £16 (online special ), the tour’s value was well worth the price. Even if I had to pay the full adult price of £24, I’d highly recommend The Giants Causeway Day Tour with Allen’s Tours.