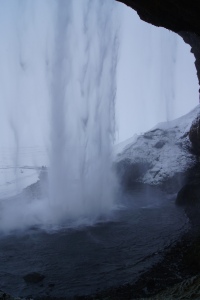 My two day South Coast and Jokulsarlon Ice Lagoon mini bus tour with Extreme Iceland was one of the highlights of my thirteen days in the amazing country that is Iceland! It was originally a three day tour that included the ice cave, but Mother Nature has a mind of her own, and the cave had started to melt. So this part of the trip was cancelled.  Regardless, this south coast tour took in some of the best landscape Iceland has to offer.

Being the first person to be collected, I sat in the front seat, my favourite place. What I personally love about the front seat is the view of the road being travelled ahead. Other than actually driving, being passenger up front is the next best thing for me. Plus I’m not one to fall asleep in a moving vehicle either, especially with so much visual stimulation beyond the windows.

Iceland is very flat, with less than one percent of the country covered in trees. And as it snowed most of the day, the landscape beyond the window looked like flat snowfields. The white of the snow merged with the sky, and the mountain ranges remained hidden from view. Instead, only some rocky outcrops could be seen, along with some volcanic rocks on the ground.

First stop was Seljalandsfoss. Foss means waterfall, and this one was sixty metres high. Into the winter wonderland I trekked to view Seljalandsfoss, and onto the track that takes you behind it. The ground was very icy under foot, and very muddy behind the waterfall. So much care was needed on the approach, but it was worth it. There’s something special about standing behind a waterfall and seeing it cascade down in front of you.

Skogafoss was the second waterfall to be viewed.  The landscape here felt expansive, with various shades of grey set against a white snow backdrop.  There is a metal staircase that leads to a viewing platform at the top of the waterfall, well worth the hike up to see the waterfall from above, as well as the land below.

The black beach at Vik was impressive, especially because the black volcanic sand and rocks contrasted against the white snow. The ocean had some strong currents, and we were warned against standing too close with our back to the waves. Some people have been dragged into the water, and drowned as a result.

Our evening was spent at Smyrlabjorg, a small village by the ocean, with towering mountains around. The guesthouse was so beautiful, with some amazing photographs on the walls depicting the northern lights and Jokulsarlon. I love landscape photography and I felt like I was viewing an exhibition. I definitely recommend eating dinner with the group, which is not included in the tour price. The vegetable soup was freshly made, the trout delicious, and the chocolate cake rounded off the three course dining experience with a glass wall looking out to the ocean.

With an overcast sky forecast for the area, trying to catch a glimpse of the northern lights was not possible, even though the activity was good. A brilliant day spent, I couldn’t wait to see what day two would bring. Stay tuned…

(Photos uploaded on the Gallery page)